To share your memory on the wall of William Martin, sign in using one of the following options:

To send flowers to the family or plant a tree in memory of William Martin, please visit our Heartfelt Sympathies Store.

Receive notifications about information and event scheduling for William

We encourage you to share your most beloved memories of William here, so that the family and other loved ones can always see it. You can upload cherished photographs, or share your favorite stories, and can even comment on those shared by others.

Posted Jul 16, 2020 at 02:38pm
To Bill's Family - Our sincere sympathy to all of you in the loss of Bill. He was a good man and community supporter, especially in the softball domain. He will be missed by many including the neighbourhood where we used to live.
Virginia and Susan Drayson
Comment Share
Share via:

Posted Jul 16, 2020 at 02:06pm
Dear Gwen and family,
It is with heavy heart that I partake of your grief. Bill will always hold a very special place in my heart. I can only believe that he is no longer suffering and is now at peace with his Father in heaven. I am so sorry for your loss, I pray God will nurture you all through this and any future difficult times.
In Yeshua's name,
Celia
Comment Share
Share via:

Posted Jul 16, 2020 at 01:00pm
My deepest condolences to you all on the death of Bill. He was a gentleman in the truest meaning of the word. He was always kind and took a great interest in everyone he met. His love and care of Gwen was truly touching. You are in my thoughts and prayers. God Bless you. Rev. Darrell Maguire First Baptist Church Simcoe
Comment Share
Share via:
LH 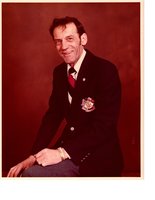