To share your memory on the wall of Robert McKaskell, sign in using one of the following options:

To send flowers to the family or plant a tree in memory of Robert McKaskell, please visit our Heartfelt Sympathies Store.

Receive notifications about information and event scheduling for Robert

There are no events scheduled. You can still show your support by sending flowers directly to the family, or planting a memorial tree in memory of Robert McKaskell.
Visit the Heartfelt Sympathies Store

We encourage you to share your most beloved memories of Robert here, so that the family and other loved ones can always see it. You can upload cherished photographs, or share your favorite stories, and can even comment on those shared by others.

Posted Jul 07, 2020 at 08:46am
I entered Western University as an adult and could only attend courses in the summer. Bob is the only prof that I can remember his name. He opened my eyes to art and I will be eternally grateful and so will my family. I have been to galleries around the world with Bob on my shoulder. We went to Detroit to see Diego Rivera, attend performances art, partied at his house and instilled my love for Marcel Duchamp. Thank You Bob. How appropriate that today is Frida Kahlo's birthday as I write this. Cheers to you my friend.
Sharon Howlett
Comment Share
Share via:
GM 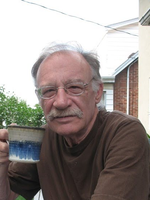